Call For More Women Engineers To Stand Up And Be Counted 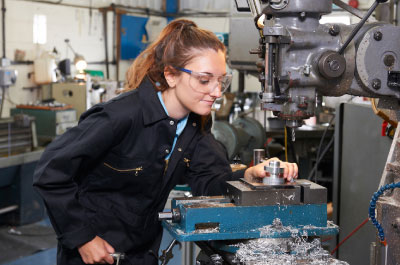 The major imbalance between the sexes when it comes to employment in engineering and technology in the UK is regularly flagged up as an issue of importance to the long-term future of the sector.

Now, a new push, launched to coincide with National Women in Engineering Day (which was on 23 June for all of you ‘There’s a day for that’ fans), is aiming to persuade women working in study, research and development based around engineering-related subjects to publish their work, as a way of demonstrating that new thinking in the industries isn’t just the preserve of men.

The call has come from the Institute of Engineering and Technology, a body which sees its mission as “to inspire, inform and influence the global engineering community,” so it’s fair to say that if it perceives that the gender imbalance in the sectors is a problem, then it’s an issue which is worthy of being addressed.

The issue of the lack of women embarking on STEM career paths is clearly one which goes to the heart of the general difficulties the sectors face in attracting sufficient quality new entrants in the first place.

Like many other important business sectors, the fact that those who are making big strides in STEM tend largely to have low public profiles is a problem which many in the sector feel works against attracting the bright, new female talent which is claimed to be so sorely needed.

A notable exception to this came, coincidentally, on 23 June, when the Daily Telegraph published a roll call of the 50 most prominent women currently working in engineering in the UK.

More than 800 women were nominated for a place on the list, and below is just a sample of those who made it (with their place in the top 50 shown in brackets):

And (cue fanfare) top spot went to Roma Agrawal, a structural engineer who has (literally) left her mark on the London landscape, having helped design The Shard, and is now heavily involved in giving talks aimed at inspiring future generations of engineers.

A common thread among many of those who made the list is a dedication to encouraging more women into engineering-related studies and careers. They are acutely aware of the obstacles which can stand in the way of women trying to get established and progress across the entire STEM (science, technology, engineering, manufacturing) sphere.

Visibility Of Women Key To Change

The Telegraph’s report also pointed to the strong positive effect which seeing women working in key roles in a variety of fields can have on young people who are deciding on their future career path.

“The influence of positive female role models can’t be underestimated in energising the next generation,” said Fiona Tatton, editor of digital magazine Womanthology, and one of  Key the judges who helped determine the composition of the Telegraph’s list.

She clearly agrees with the assertion that, in order to increase the level of female representation in engineering from the current level of six per cent, the problem also has to be tackled from a generation further back – another figure included in the same Telegraph report suggested that 93 per cent of parents would not support their daughter if she decided to pursue an engineering-based career.

The Women’s Engineering Society was responsible for establishing the National Women in Engineering Day in the first place, because it felt there was a need to link together efforts being co-ordinated separately by government, education, business, professional institutions and individuals towards raising the profile of careers in the sector in the eyes of those facing the choice of which field to concentrate on.

It has been fighting the battle since 1919 to try to create a society in which “women are as likely as men to choose to study and work in engineering, and one in which there are enough engineers to meet a growing demand.”

While there can be no doubting the merits of this highly worthy aim, cynics might point to the fact that, almost a century after it was established, women continue to be outnumbered in the profession by 16 to one, and suggest that – despite the undoubted advances gained in respect of equality in many other fields – its task is insurmountable.

The entry of so many more women into the workplace since the Women’s Engineering Society was formed, for one thing.

That has, of course, meant that there is the ability to push boundaries when it comes to expectations and aspirations, and, in many sectors, the direct competition between the sexes has been greatly intensified, as a result of women generally pursuing a wider range of careers.

The national labour force survey from the UK’s Office for National Statistics found that, as of June 2016, out of a total UK workforce of almost 31.6million, 14.7million were women, and 16.9million men.

Three-quarters of the workforce are in full-time jobs, the same survey found, but of those only working part-time hours (a total of 9.5 million), 6.26 million are women, and just over one-third of this number (2.24 million) are men.

This massive majority of women forming the part-time workforce may be one reason why so few are able to pursue careers which are by and large considered to be full-time, which would include most jobs in engineering.

It’s still clear from these figures that, when it comes to taking on responsibility for bringing up children, women are overwhelmingly the ones who make the sacrifice of switching from full to part-time work – which means that they find it more difficult to sustain a career which places heavy demands on them in terms of working hours as well as flexibility when it comes to where they work.

However, the Times Educational Supplement has made the valid point that gender imbalances are also present on a similar scale but in the reverse (i.e. women greatly outnumbering men) in a number of sectors which might be considered as equally important to the successful future of the UK economy.

It reported on an address to the Association of University Administrators’ conference in 2014 by the then-head of UCAS, Mary Curnock-Cook, in which she said: “We hear all these things about [getting] more women into science, and women doing physics, and computers and so on, why don’t we hear more about getting men into nursing and education and social work where, after all, there’s a very ready supply of a very large volume of jobs?”.

When it comes to women’s and men’s respective roles in society, and in the workplace, there are still clear dividing lines, and as the above illustrations show, nowhere are these more stark than in many workplaces.

But with more visibility being given to the trailblazers who are working hard as advocates of careers across the whole spectrum of STEM disciplines, there’s no shortage of inspiration for those who want to challenge the status quo, who have ambition, and want to see how far it can take them.

Do you want a taste of the opportunities which could open up for you if you’re set on pursuing a career in engineering? Visit our site today.