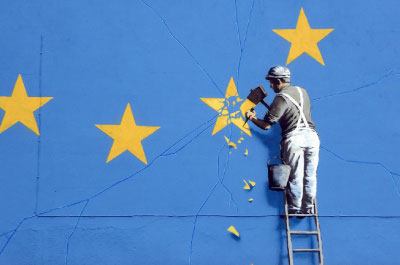 It’s a hot topic just now – as the country starts to take in the ramifications of the decisive vote on 23 June, when the electorate decided by 55% to 45% that Britain’s future lay outside the European Union, every part of the economy is digesting the news, and trying to make sense of what it means for their future plans and direction.

No decision taken by voters in half a century is expected to have such a wide impact on the country’s future – and even though the outcome was decisive, disentangling ties and trading arrangements built up over that time is sure to be a protracted process, and one which is sure to bring to the surface tensions and differences which a mere half-century make seem like a temporary spat.

So before the talks get under way in earnest, now is the time for sober reflection, and possibly considered thought over what a world outside the EU might look like.

The Rollercoaster Takes A Dip

But there are reasons to think that the early signs of prospects for manufacturing and engineering in the UK aren’t good. A report at the end of July from the Engineering Employers’ Federation found that members’ confidence had dipped in all parts of the UK since the EU referendum result had been announced.

The Federation’s annual report uses data gathered from members, along with the government’s Office for National Statistics to draw a picture of the levels of confidence among manufacturers. It came to the unequivocal conclusion that “manufacturers’ business confidence has taken an across the board beating”, with every English and Welsh region registering a downturn in optimism.

Measuring participants’ confidence as a score out of 10, the EEF found that it had dropped from 6.37 pre-referendum to 5.24 in the weeks which followed.

In the north-west, the degree to which many manufacturers depend on continuing support from an overseas parent business was laid bare, with more than a quarter (28 per cent) expressing fears over whether they might continue to be treated fairly. More generally, nearly six out to 10 firms in this region identified their biggest concern as possible weaker demand for their products.

Worryingly, a quarter of manufacturers in the north-west of England claimed they couldn’t see any new opportunities arising for them as a result of Brexit.

When it comes to what manufacturers want to see in order that confidence can be built,  a solid business environment, supportive policies and the right outcome from Brexit negotiations should get sentiment back on track.

While recognising the scale of the negative sentiment in the sector in general, Lee Hopley, Chief Economist at the EEF, nevertheless reiterated that engineering firms have experienced all kinds of economic conditions, and have often succeeded by facing such challenges head-on.

“The referendum outcome has provided a jolt and it’s clear that there are fresh challenges ahead,” she said.

Time For ‘UK plc’ To Show Its Mettle

“Exchange rate volatility, political uncertainty and the danger of increased costs are already causing concern across the regions and business confidence is in short supply. But our sector is nothing if not dynamic, determined and resilient. UK manufacturing remains a force to be reckoned with.”

She stressed, however, that “a solid business environment, supportive policies and the right outcome from Brexit negotiations allowing for trade and ongoing access to skilled workers” were now essential for ensuring that the sector could defy the doom-mongers and find a clear path forward.

Tom Lawton, partner and head of manufacturing at accountancy firm BDO – which co-compiles the EEF’s report – added that many businesses had had time to adapt to the likely outcome ahead of the vote, and said its outcome “should not detract from the fact that UK manufacturing performance over the last 12 months has been strong with six (out of ten) regions seeing an increase in output.”

He said many businesses would be heartened by the promise from Prime Minister Theresa May of “a proper industrial strategy”, and challenged her by adding: “We would like to see the Government match manufacturers’ long-term outlook by developing a 15-20 year industrial policy that avoids the disruptions of the political cycle.”

Weaker Pound To Come To The Rescue?

Industry editor for the Telegraph, Alan Tovey, noting that the manufacturing sector still  represents 10 per cent of the UK’s £1.8 trillion GDP, added that the depreciation of sterling against other currencies since the ‘leave’ vote should, in the short term at least, provide a boost, because it “makes exports cheaper, with buying British becoming more attractive to foreign purchasers who suddenly find their currency goes a lot further.”

At the same time, he added, it should also mean “a short-term boost to Britain’s internal market, with manufacturers more likely to source components for their products domestically as buying abroad becomes more expensive.”

Sales among UK manufacturing companies are split roughly equally among Europe, the United States and the rest of the world, pointed out Jo Reedman, senior capital goods analyst at N+1 Singer. As a result, she agreed that the weaker pound should bolster efforts to remain competitive and sell products well beyond the boundaries of the EU.

Mixed Messages For The Motor Industry

With the UK’s motor industry boasting very strong international – not just European – links, Prof David Bailey, an analyst of the sector from Aston University, Birmingham, said Brexit would be a double-edged sword. While it will make exports more competitive, and so possibly boost sales, with consequent increases in production to meet demand, “it will also increase the cost of importing components, and about 60pc of the components that go into UK assembled cars are imported.”

Given that, under the Lisbon Treaty, the negotiations which will eventually lead to the UK breaking its formal ties with the rest of the EU could take up to two years – and that includes provisions for negotiating alternative trade agreements – it’s expected that many firms will continue with ‘business as usual’ for the immediate future, and there should be no reasons why this approach won’t bear fruit.

But, as Capita Translating – a business which has a vested interest in see the UK continue to trade with as many nations around the world as possible – points out: “The bad news is that trade deals take an excruciatingly long time to negotiate – in 2009 the EU ended a 15-year dispute with Latin American countries over importing bananas! But, being such a big trade partner to the EU means they are more likely to want to agree a deal quicker.”

So, for now, there are no reasons why prospects for manufacturing in the UK should be downgraded. And indeed, right now, with a low pound, and existing trading agreements still running their course, it’s a good time to be looking to spread the ‘Made in the UK’ message anywhere around the world.